Regional Development Officer and Coordinator of Irish Sailing for the Women Gail MacAllister, on the Water Ireland (WOWI) program had a talk with Helen Cooney. 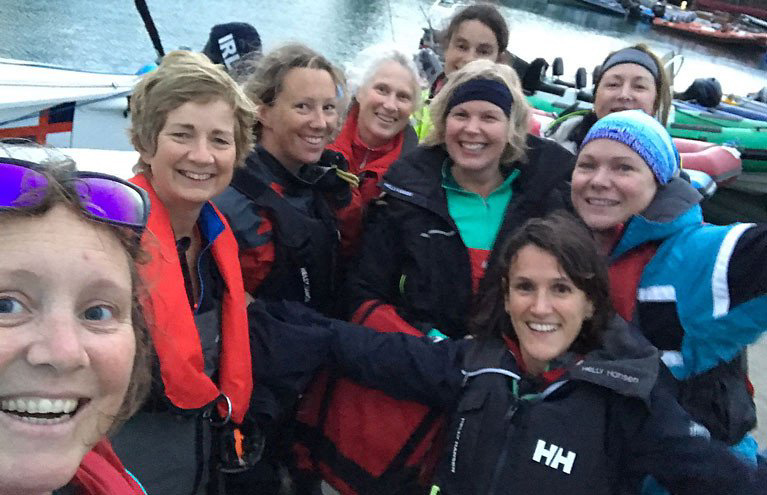 In her talk, she discussed about how the program is executed at the National Yacht Club (NYC).

The program WOWI was launched by the Irish Sailing in 2011 with an objective to create more opportunities for women to train, learn and compete on the water. After the introduction of this program, a number of women from all over the country have been introduced to sailing. And the only person who is heading this program is Helen Cooney; she is also a volunteer from the National Yacht Club (NYC).

Helen did not have any sailing background, but at the age of 14, she started sailing in a Mirror dinghy in Lough Derg Yacht Club. Form her experience only she is aware that this could be a great family sport.

Helen acted as the Junior Organiser in the NYC for many years; she worked as a physiotherapist and did a great job in bringing up the young families in the sailing. Still, she feels the need of women encouragement in the world of sailing and this made her to take the WOWI program. END_OF_DOCUMENT_TOKEN_TO_BE_REPLACED

The two practice sessions that have been held in the Bermuda waters in preparation for the America’s Cup 35th series have seen Artemis Racing staying in strong form.


The Great Sound of Bermuda is the venue for the event as well as the practice sessions that have been held. For the Artemis Racing team comprising of Iain Percy as skipper along with his mates on Magic Blue catamaran, have been emerging as strong contenders for America’s Cup. They hold onto the memory of their crew member, Andrew Simpson aka Bart, who is no longer with them as he was killed in a training accident that occurred about four years back.

Artemis team would be sailing with Simpson in their mind and they are currently working on sea legs that they did not develop when they took part in the regatta event of 2013. END_OF_DOCUMENT_TOKEN_TO_BE_REPLACED The very first edition of the sail Maldives yacht rally is going to start soon. The venue is ready and the Indian Ocean is archipelago is all set to welcome participants of this rally. This will be one of the most exotic and spectacular event for participants.

Fans of yachting in Croatia can use Bareboat Yacht Charter Croatia, a leading bespoke travel and tourism service provider, who are trying to co-ordinate getting tickets to the event en masse.

Sailing teams were not without challenges as the week of races have started for them in the Rio Olympics games. The US team in Rio de Janeiro had been preparing for months in order to get familiar with the tidal cycles and wind patterns in the Guanabara Bay. On the second day of racing the team experienced light wind that made it difficult for the races to begin. The early races in the five different categories were defined by tactical parameters that were treacherous. The races on the second day took place in the Guanabara Bay area.

Caleb Paine from San Diego struggled in the early stages on this day, but he was able to make a good comeback on the opening race in the heavyweight Finn class for men. He stated that the race was exciting as the breeze was coming in from both directions and it would die down and build up again. He is a champion in the Sailing World Cup series was definitely able to meet the exhilarating parameters of the race. END_OF_DOCUMENT_TOKEN_TO_BE_REPLACED

Hodgdon Yacht Services, the Hodgdon division that is committed to refit, repair and maintenance services of recreational yachts and boats, recently acquitted refit and repair work on 46.9 meter ketch Asolare at the facilities in Boothbay in Maine.
Started in the year 2003 by Hodgdon Yachts, Bruce King designed vessel, with interior design by Winch Design, was the largest cold-molded yacht ever made at that time. Hodgdon chief executive officer and President Timothy Hodgdon, said that as the real builders of Asolare, they are happy that they were able to complete this important repair work.

The company’s link to this yacht – combined with their technical expertise – uniquely positioned them for the execution of this project.
The work included substitute of the mizen mast, fixes to the astern cabin and deck regions, extensive sustentation to the sea water, electrical power, hydraulic as well as mechanical systems, along with a climb to the computerized sail handling checks.

END_OF_DOCUMENT_TOKEN_TO_BE_REPLACED

Johann Buttigieg, the MEPA chief executive officer, told that this night that he could not omit the probable evolution of a yacht marina at Zonqor Point – the place identified by the MEPA for American University of Malta project – if Local Plans stays unaltered. As such, he could also not boot out that the building height might increase to a maximum of 10 stories as a result.

Mr Buttigieg was being asked in another meet of Parliamentary Environment Committee, led by PL MP Marlene Farrugia, who had earlier objected to the use of the ODZ land for this project. The CEO of MEPA also stated that the Sadeen group had not yet went for the project. No Environmental Impact Assessment had yet been executed as of now.

Mr Buttigieg was told to report why the government chose for Zonqor and Cospicua places when the report of the site selection had identified other suitable places, including a 29000 site in Tarxien. Mr Buttigieg reported that the places were assessed on archaeological as well as ecological basis. At this point this was a desktop study. After the site was chosen experts (such as the guys who specialise in Yacht Rental Greek Islands) would come in and could decide that the site was not suitable after all.

Ambjent Ahjar’s John Cauchi stated that he saw no coherent progress between the place selection as well as the final choice. He stated that Fort St Rocco could be a great candidate site, mainly when it is melded with nearby places. Dock No. 1 has less than half of the region then the Forti Saint Rocco.

Andrey Melnichenko, a Russian billionaire and businessman, likes to charge yachts which are not like anything that have ever been made before. He began with a magnificent, 390-foot yacht which was designed by the Philippe Starck and made by Blohm + Voss in Germany.

It was introduced in the year 2008, was bruited to cost roughly around US$ 300 million dollars, and is just called A. It has room for fourteen invitees and up to thirty-seven crew.

But Motor Vessel A is quite small if we compare it to Melnichenko’s newest Starck-designed statement yacht. The Sailing Yacht A was launched in Germany recently and is astonishing in its proportions as well as price tag (reportedly well more than US$400 million dollars).

It assesses 468 feet long, its 3, free standing masts are well more than three-hundred feet tall, and as you can see, this is quite a…sight. Once they set the sails, it would technically be one of the biggest sailing vessels in the world for Melnichenko as well as up to twenty guests to enjoy.